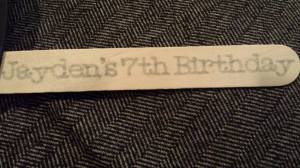 I like to pat myself on the back for the fact that I have raised some pretty amazing boys this far. For instance, my stepfather took my 7 year old to Toys R’ Us just before his birthday party to pick out a gift. Whatever gift he wanted to get within the allotted amount of money. He strolled up and down the aisles of his favorite toys and picked out 1 item that was only a small fraction of the money he could spend. What did he do next? He saw an Angry Birds video game and knowing his brother loves Angry Birds, he said “I am going to use the rest of my money to get this game, I think my little brother would love it!”. Yes, he spent 2/3 of his money on his 2 year old brother.

With that being said, you probably have a good understanding of the personality of my boy. He’s very loving, giving, and caring. He wants to do right by others and constantly looks to make others happy, especially his family and friends. He received some money and gift cards at his birthday party and said he wanted to save it for something he really wants instead of splurging at the toy store. So when we went to the Burger King drive through a couple nights later to get family some quick dinner, he said  “Mom, can I buy the food for you guys?”. Initially I said “What?!, No, I don’t want you using your money to buy our food, I buy the dinner”. But when he said “Mom, I really want to use my money so you don’t have to use yours” I just melted and said “OK, I’ll let you buy it if you really want to, thank you”. I made sure he understood that his $50 would now turn to $30.50 after spending the $19.50 to buy our food and that he wouldn’t get that money back, but he said he understood and that is what he wanted to do with his money. He said he had the toys he wanted, and that he would save the rest for something else he wanted in the future.

Of course I let him “buy” our food, and his money really stayed put, well it did come out of his spending money, but it went into his savings. If figured I want to start him off right. And that he was right. He should be able to do what he wants with his money as long as he’s making the right choices. And boy was he making the right choices all on his own. Spending his only money on his family, I couldn’t ask for more. From then on, any time he said “Mom, do I have enough money to get this, I want to buy it” I let him buy it with his own money. He is learning and preparing for the future. I want him to always be the kind person that he is today and do for others as much as he can. Me always doing for him, and not allowing him to have that type of gratitude because I do it because I want to, not because I have to, is not what I want. I am proud that he made this decision for me. My 7 year old will continue to buy his own food, or his families food as much as he wants until his money is gone (into his savings of course) and then if he wants to buy us more, he’ll need to pick up some paid chores.

I know I’ll make wrong decisions in life, and I know I’ll make parenting mistakes, but this is something I know I did right. And I am proud of my boys and the people they’re growing to be. Both of them.