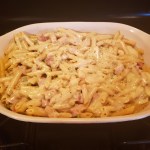 Most weeknights I don’t mind cooking. In fact I love to cook probably more than anything else, but I have limited time since I don’t get home from work until around 6pm.

Tonight I had an idea of what ingredients I wanted to use as it’s food shopping day tomorrow and I make up whatever I can to use what’s left of the weeks in hone ingredients. That’s when I thought about making this shortcut chicken cordon bleu and it came out super yummy!

When I say this recipe is easy, I mean it took longer for me to write this recipe then to execute the entire dinner and eat it kind of easy…

I used 3 frozen Tyson grilled chicken breasts and started off by putting them in the oven per the back of the bag (375° for 20 minutes). Then started a pot of water to throw in some penne noodles so they’d be done at the same time as the chicken.

Next, I grabbed a pan and tossed in some butter so I can simmer some chunks of ham. You can’t make chicken cordon bleu without ham! So I used a prepackaged honey ham steak I had and chopped half of it into cubes. I simmered these in the butter and once browned and some nice ham grease was in the pan, I added a jar of classico creamy alfredo sauce. This added the ham flavor to the otherwise fairly bland canned alfredo sauce.

Next, I tossed in a half can of small peas and a cup of white cooking wine. All of this simmered together until the noodles and chicken were done. Leave the oven on.

Then I drained the noodles and the three chicken into cubes. I mixed everything into a pot and added some shredded Monterey jack cheese, about a handful (it’s what I had). After tossing it together, I sprayed my casserole dish with pam cooking spray, and added the mixture to it. I topped it with some Italian breadcrumbs (just a sprinkle), and layered some provolone slices across the top covering the entire thing. You should use swiss to be true to the original “cordon bleu” recipe, but again, I used what I had on hand and I actually prefer provolone to swiss.

Last step, cover loosely with tin foil so it doesn’t stick to the top layer of cheese and pop it in the oven just to bubble inside and heat the cheese on top, 375° still as previously set, for about 10 minutes.

That’s it! That’s the shortcut way, feel free to replace ther frozen with fresh chicken although I must say there is really no need to as this came out great! My only additional advise is get 2 jars of alfredo if you’re using an entire box of noodles. I used half a box and 1 jar and it was a tad but drier than I would’ve liked. Maybe 2 jars with 1/2 box of noodles would be best to keep it extra saucy!

Let me know what you think if you try this easy simple Chicken Cordon Bleu Casserole recipe.